Trying something new with a beginners mind shouldn’t be very hard, should it?

Well, sometimes it is. Sometimes, there’s stuff coming in between. At least for me. There’s arrogance, for example. A sense of, I already know this, I “just” need to be shown how to practice it… 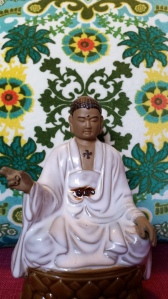 In my teenage years I became very interested in Zen Buddhism, started meditating and also started practicing some unusual Japanese martial arts, always careful to emphasize that my main purpose was to find focus, to quiet and sharpen the mind. To find peace and become a better person in the process. To practice MINDFULNESS. Even though I didn’t know that term back then.

I have to admit, that I probably never really understood the role of the BODY being involved in these activities. I’m smiling. It sounds silly. Even more so, considering that most people who practice martial arts do it mainly with focus on physical strength and fitness (which I admittedly did look upon with disdain, back then), and also while evidently doing the practices with my body, I saw it more as a tool, an instrument to use for living, but not as an integrated part of myself.

Not seeing / feeling the body as an integrated part of oneself, easily leads to not caring for it very much – which over the years might have effects like not getting enough exercise, sleep, healthy foods, and many other, more subtle effects – the fact that you’re focusing all your free time on “personal development”, doesn’t change that. I’m grateful that my healing- and personal “development” journey eventually made me stumble upon EFT (Emotional Freedom Technique), Energy Psychology, and Energy medicine. The coaching I’ve gotten within the Thriving Now Team*, has helped me moving back into my body. Partly. For years now, my coach has kept on giving me gentle reminders and suggestions for things I could do to take that process deeper. Useful especially at times when there’s so much energy swirling around in my body that I don’t know how to handle it. Alternatively, when it feels like there’s no energy at all. Which is more often.

To be honest, however grateful I was for those suggestions, I often just nodded, but didn’t really do anything.

To really integrate a new practice in our lives, I believe the desire has to come from within.

My dear and encouraging friend, Satu

And finally it did! Unexpectedly (at least for me), I developed an interest in Yoga. After a few months of tuning in by looking in pretty books and being encouraged by a friend, two weeks ago I walked into a newly opened yoga studio**. It didn’t feel heavy, my steps were light. A person I immediately liked, gave me great guidance on with which classes to start, to best meet my current needs. The needs to quiet down my BODY and MIND and refill my energy tank.

It doesn’t matter what my life’s journey has been. It doesn’t matter how much (or how little) knowledge I have about things that might, or might not relate to Yoga on any level or in any way. I am a true beginner. As every aspect of my BODY easily tells. Even if my MIND sometimes gets in between, I have decided to ENJOY being a beginner. It gives me so much  more freedom! Freedom to make mistakes and to be as stiff as my refrigerator!

Did you know that the word YOGA, which is Sanskrit, means “to join” / “to unify”? BODY, Mind, and Spirit. Or whatever you want to call those different aspects of your being.